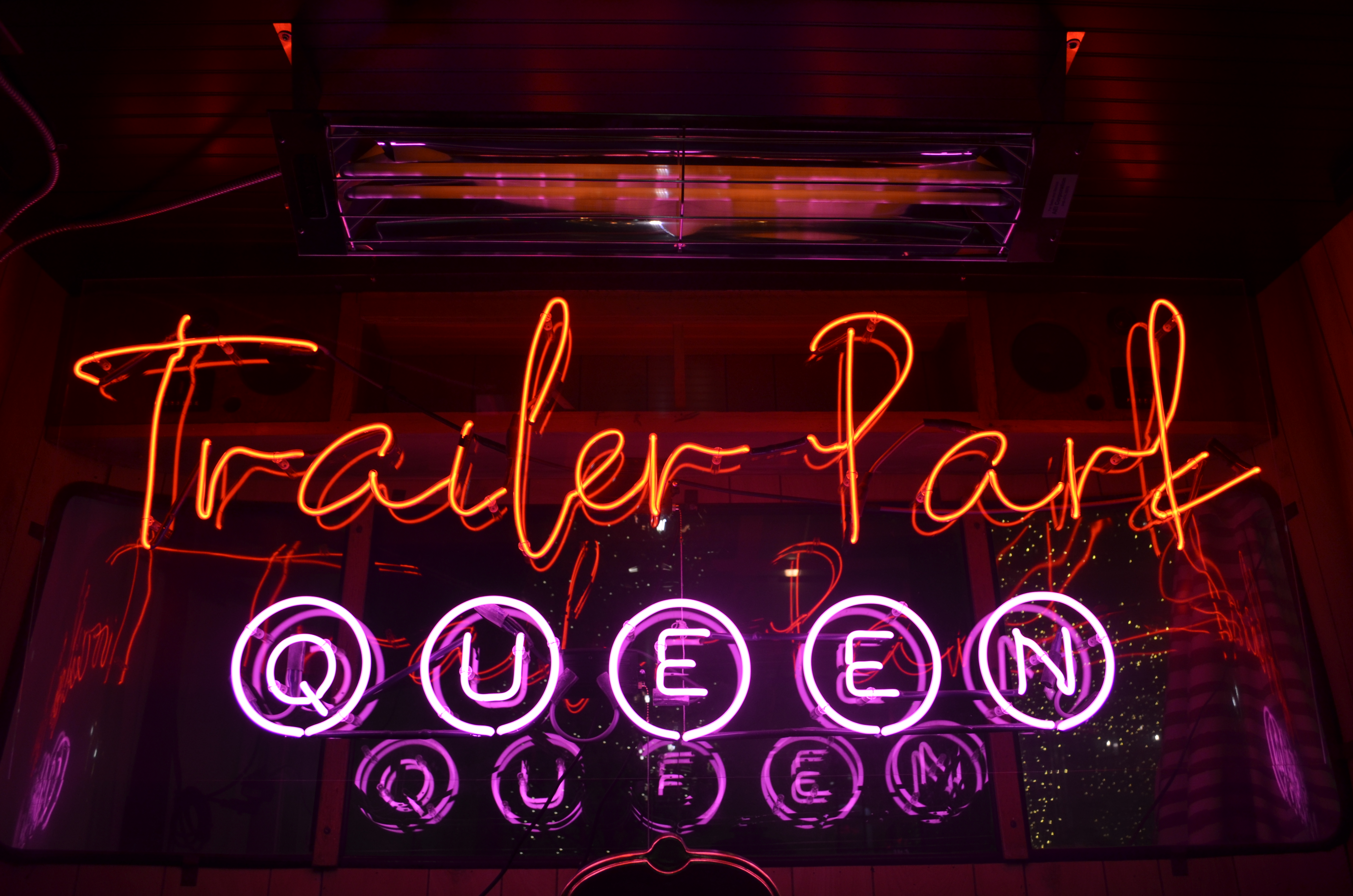 In a room off to the side, Paradise Park still has an LED sign with the restaurant’s original name. Photo by Joely Simon / North by Northwestern

When I think of my teen years, I think of a turbulent time. Everyone jokes that the teenage years are just a phase, but the harsh, embarrassing memories last. Right now, Chicago is in the teens. Weathermen predict the temperature on January 30 to be the coldest day in Chicago’s history, mirroring the temperature of Antarctica. However, like our embarrassing middle school years, winter is just a phase in the progression of nature and the year. The time spent in the plunging Fahrenheit numbers has frozen our memory and we have forgotten moments of warmth.

Luckily, a restaurant on West North Avenue in Wicker Park has found a way to make this rough weather more bearable. Owners of Paradise Park, a bar and pizza restaurant owned by the Ace & Gary Hospitality Group, decorated the restaurant with a trailer park aesthetic and a tented patio to preserve the outdoor eating experience during Chicago’s harsh winter. The restaurant just opened this August, but already handles the gloomy spirit of the winter like a pro. 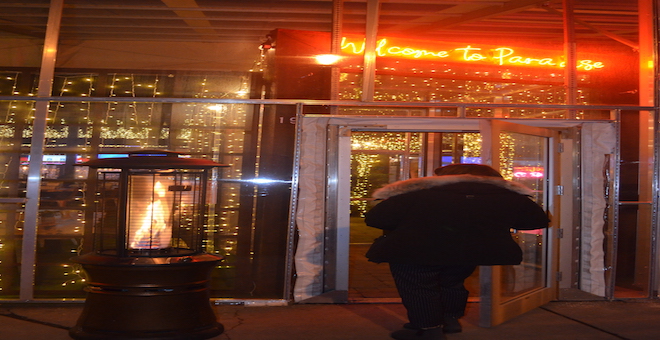 Weinberg sophomore Katharina Nachtigall escapes the cold as she walks into Paradise Park, comforted by the heat lamp and red “Welcome to Paradise” LED sign. Photo by Joely Simon / North by Northwestern

Upon entering the restaurant, I was immediately greeted by yellow lights and a blazing red Paradise Park sign against a wooden wall. Altogether, this began my journey away from the Chicago wind and into the patio I dreamed up in my imagination while walking to Tech for my Monday morning class just days earlier. 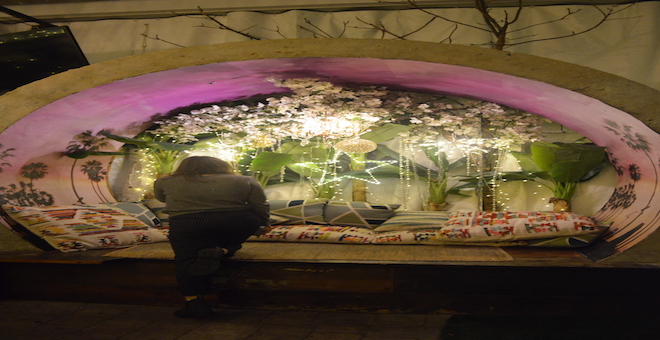 In the back of the restaurant is a a couch to relax on that evokes watching the summer sunset. Photo by Joely Simon / North by Northwestern

Just as warmly as I was greeted by the lights and picnic-reminiscent wood, the hostess welcomed me to Paradise Park with enthusiasm. Right next to her table stood a huge trailer car, which she happily informed me was a real trailer from Winnebago. She also explained that originally, the owners Josh Lachelli and Clay Hamilton named the restaurant Trailer Park Queen to capture how the decor achieves a posh trailer park aesthetic. However, according to manager Ryan McKinley, the owners changed the name to Paradise Park to turn the restaurant into its own trailer park community. 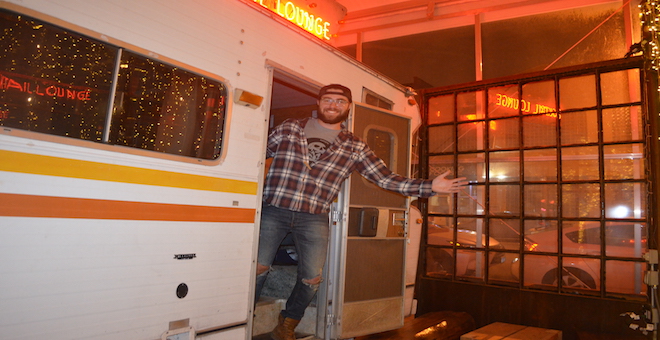 Across from the hostess table are three rows of lawn chairs for customers to sit, have a drink and wait for their tables. Between plastic lawn chairs and swinging picnic benches, I imagine myself sitting there for hours, enjoying my favorite outdoor lounging activities of reading a book or playing cards with my family. 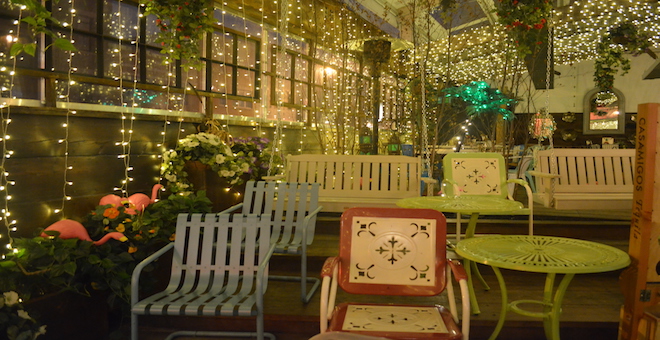 On the left side of the entrance, a series of picnic chairs and lawn furniture serve as a space to sit and have a drink while waiting for a table. Photo by Joely Simon / North by Northwestern

With fake grass, flamingos and disco balls scattered throughout the restaurant, Lachelli and Hamilton created a tacky, flashy and overall outdoorsy atmosphere that transported me not only to a summer oasis, but also to a strange world where the muddy outdoors meet the chic restaurants of beachy Miami. Its merging of trailer park with posh disco puzzles entertain you, yet its uniqueness creates a grandeur that certainly made frighteningly cold weather seem like a phase that had an end in sight. 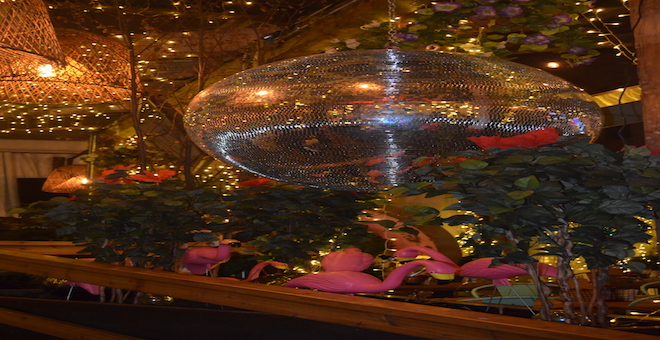 The restaurant’s owners, Josh Lachelli and Clay Hamilton, decorated Paradise Park with the intent of evoking the outdoor living experience of a trailer park– with a posh twist. Their decision to scatter plastic flamingos and disco balls around the patio works to achieve this vision. Photo by Joely Simon / North by Northwestern

Most importantly, Paradise Park offers 29 different types of thin crust pizza, including vegetarian options. The restaurant also offers a BYOP (build your own pizza) option and various appetizers and salads that are perfect for sharing and picky eaters. Of course, Paradise Park also has a gluten-free option for the crust– you just have to ask. 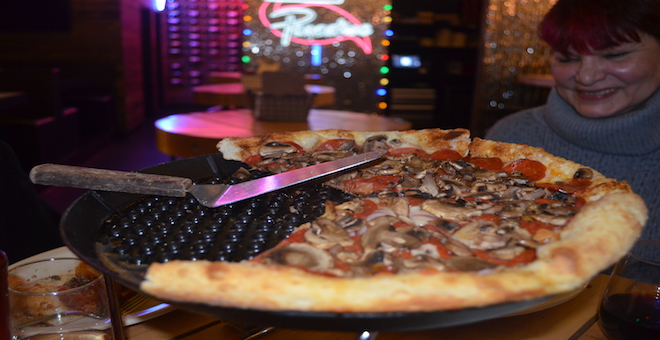 As amazing as the pizza is, “the cookie dough bites rolled in Oreos and sprinkles, and the s’mores skillet dessert were the best,” said Weinberg sophomore Katharina Nachtigall. The s’mores especially evoked memories of the fireside at summer camp or on the beach. However, unlike the burnt, flaming marshmallows that always burned the roasting stick at camp, Paradise Park perfected their brown, toasted marshmallows. 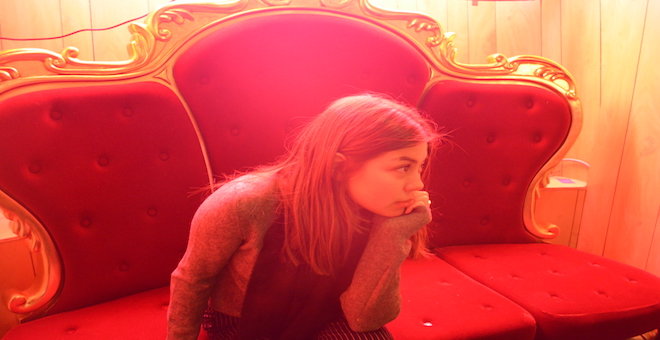 While waiting for her meal, Weinberg sophomore Katharina Nachtigall sits on the red velvet couch underneath the Trailer Park Queen sign. Photo by Joely Simon / North by Northwestern

According to a female bartender, the Umbrella drink is the most popular at the bar. For the festive drinks, she uses a Siegal Radler can and mixes it with Greyhound. The perfect place to lounge on Mondays through Thursdays, artists or bands perform at the restaurant from 6 to 9 p.m. While I did not get to see a live performance, I can only imagine it would heighten Paradise Park’s summer atmosphere.

Both the decor of the restaurant and the name itself allow you to escape from not only cold weather, but also the other harshnesses in your life by entering an imaginary world where trailer parks have gourmet pizzas and disco balls shine beyond the dance floor. 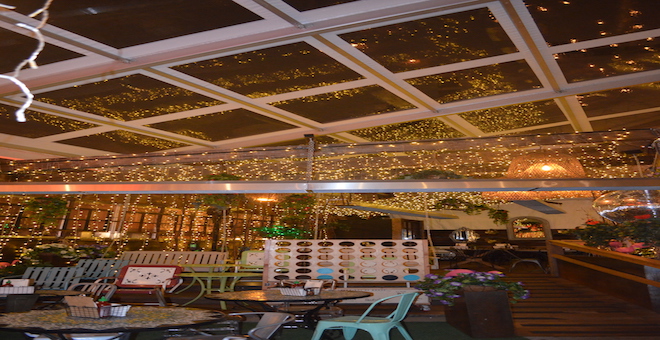 Just before the new year, Paradise Park put a cover over the patio section of the restaurant. In the summer, the patio tables mingled with activity of West North Avenue. Next year, the owners plan to put the patio cover up sooner now that they know the best company to do the job. Photo by Joely Simon / North by Northwestern 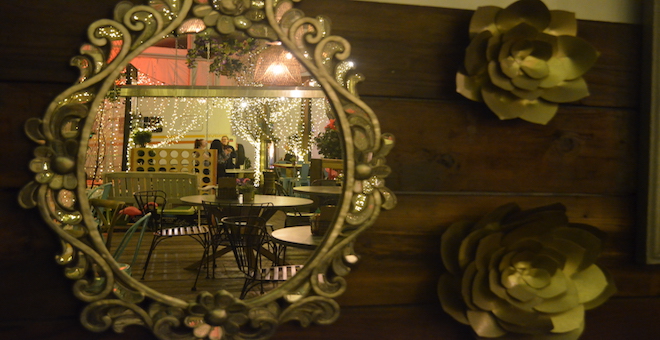 One of three ornamental mirrors on the back wall reflects the posh aesthetic that juxtaposes the trailer park theme, providing a view of the deck seating and large, wooden Connect Four game by the entrance. Photo by Joely Simon / North by Northwestern