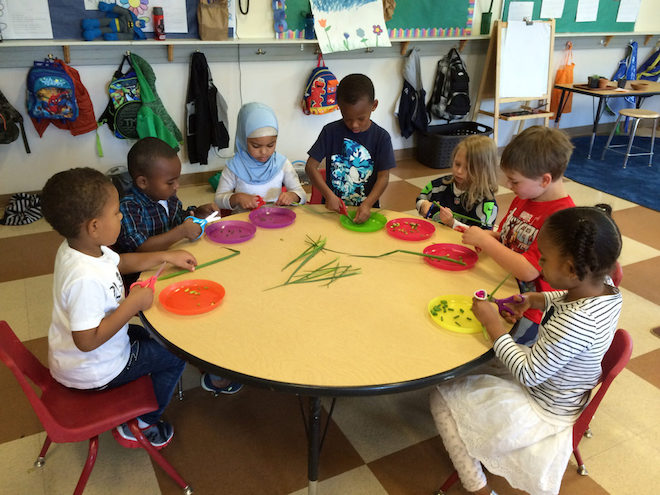 A new study led by researchers from Northwestern University and New York University found that children as young as four years old showed a strong pro-white bias and that racial bias was expressed more strongly toward males than females.

The study’s authors were interested in investigating whether children could exhibit intersectional bias, a type of social bias that relies on both gender and race. Intersectional bias has been documented toward black males in particular. Studies have shown that they are viewed more negatively by adults of all races compared to black females, white males and white females.

Preschool-aged children were chosen as the subjects because children typically start to interact with individuals outside of their family at that age, and thus start to be exposed to social biases in their communities. Furthermore, at that age, children are able to address social biases more easily than older children or adults. The study’s participants were mostly from the Evanston area and reflected the area’s local race demographics (approximately 60 percent white, 40 percent other).

A study by famed psychologist Jean Piaget showed that children could only focus on one quality at a time, for example, an object’s size or shape but not both at the same time. Would this observation apply to something as complex as social identity as well? Are preschool-aged children sensitive to the intersectional bias that the adults around them exhibit?

The researchers decided to examine children’s responses to other children systematically varying both in race and gender. Four- to five-year-old participants performed an implicit bias task in which a photograph of a white boy, white girl, black boy or black girl was briefly shown, and they were then asked to rate how much they liked a neutral image (Chinese language characters, which are orthographic symbols that constitute the Chinese writing system). They were also asked to engage in an explicit response task in which they were shown the faces they had seen in the implicit task and asked to rate them on a numeric scale.

The result: In both tasks, children rated the neutral images significantly more positively if they followed images of white faces rather than black faces. Furthermore, evaluations of black boys were less positive than those of black girls, white girls or white boys.

“Just the fact that what we’re seeing at both implicit and explicit levels [of bias] mirrors exactly the type of bias we see in adults, that’s really surprising because we don’t know if it’s that they’re picking it up from adults or if it’s some other reason that they’re showing this bias, and it’s then coincidental that they have the same bias as adults,” Perszyk said.

According to Perszyk, the researchers are still unsure about why the results were what they were. For adults, there was an evolutionary explanation for intersectional bias in which outgroup members, or individuals of a different group, are perceived as more dangerous, and men are more inherently threatening than women. It’s uncertain whether this explanation would apply to children, however.

“To be able to interpret the reason for our results, we need to do additional work to see whether children who are raised in different backgrounds show the same patterns of bias, whether this might be related to an expression of parents’ bias that children might be inheriting or whether it’s simply just exposure [to diversity] or lack thereof,” Perszyk said.

The team is planning to conduct the same study in more diverse communities or neighborhoods with a different majority race demographic to see whether the results they observed were due to exposure to diversity or lack thereof. They are also looking to test the parents’ and other caretakers’ biases to see whether there is a correlation between children’s biases and their caretakers’.

Perszyk said the results of the study show how crucial it is to start addressing implicit bias in children through methods like individuation training, which involves showing children images of other children and teaching them to see those people as individuals with unique names and backgrounds rather than members of an outgroup. Individuation training has been shown to reduce implicit bias in children for months at a time.

“It’s so important to be looking early in development because the more research that’s accumulating in this area, the more we’re finding that these biases are present very early and that means that if we want to counter the development of these biases, we have to start very, very early.”