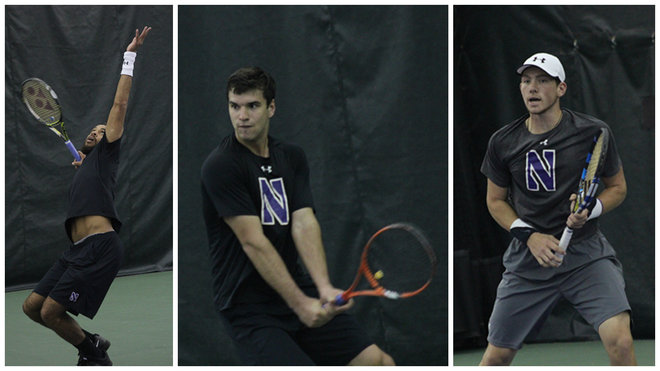 (From left to right) Sam Shropshire, Konrad Zieba and Strong Kirchheimer have led No. 15 Northwestern to a 21-2 season.

When Konrad Zieba, Sam Shropshire and Strong Kirchheimer came to Northwestern three years ago, they had one goal: win a Big Ten Championship.

Now juniors, the trio has led No. 15 Northwestern to a record-breaking 21-2 season, putting the Wildcats in fantastic position to achieve what they originally sought out to do.

“That’s 100 percent goal number one – for us, for the whole team, for the coaches, for the program,” Shropshire said. “That’s what we want to do and that’s what we’re ready to do.”

While the 'Cats have one of their deepest teams ever, their success this season largely points to what Zieba, Shropshire and Kirchheimer have been able to do for the program. In head coach Arvid Swan’s first six years at NU, the Wildcats were 83-66 (.557). But in his past three years, with Zieba, Shropshire and Kirchheimer, the ‘Cats have elevated their play, going 63-23 (.733).

“They’re great, and they set a terrific example in our younger players in what it takes to be good,” Swan said. “When your best players work that hard, you don’t have any other choice. If you’re not playing as high as those guys, there’s no excuse … they do everything right. It really helps our program.”

A large part of the trio’s on-court prowess can be attributed to their off-court friendship. Zieba, Shropshire and Kirchheimer first met long before they came to Evanston, becoming acquainted through junior tournaments.

Now, all three refer to each other as “best friends.” They have traveled to tournaments together, played with each other in the summer and will even be living together for their senior season. More than anything, the bond that Zieba, Shropshire and Kirchheimer share only drives them to be better.

All three have pushed each other to dominate the opposition this year - starting with Zieba.

With a 18-6 record and the current No. 15 singles ranking in the country, Zieba’s breakout season has especially propelled the ‘Cats. Even more impressive, he has done it while playing mostly at the number one position in the lineup, facing off against the opponent’s best player each match.

As a result, Zieba has taken down 13 ranked opponents between the fall and dual season and has even climbed as high as the No. 8 ranking in the country. After having injury trouble his freshman and sophomore years, the modest junior attributes his improvement to “staying healthy” and “just being consistent with practicing and competing.”

Another reason for the trio’s success is their unselfishness. After Shropshire posted a 23-12 record and was a unanimous First-Team All-Big Ten selection at the number one spot last year, he gladly stepped down to number two in order to give his team an advantage.

“Last year I played one for the whole year, and we’re obviously doing a lot better this year, so I prefer this,” Shropshire said. “If I could be on a team where I was five or six, that would be amazing because then we’d be pretty good.”

Shropshire is 15-7 this season and is currently ranked No. 41 in the country. He and Zieba also play doubles together, and have enjoyed success there, going 12-3.

Kirchheimer, playing mostly number three, has posted an incredible 24-3 record and currently holds the No. 73 rank in the country. 13 of his 18 wins in dual play have come in straight sets and his .889 winning percentage is the second-highest at NU for a single season.

What makes the Wildcats and their big three so special is the combination of their dominance, versatility and unselfishness. All three could probably play number one if they needed to, but they don’t care what position they are in - they just want to win.

“None of the guys have egos, that’s the biggest thing,” Swan said. “They don’t care where they play in the lineup. We’re fortunate as a team to have three guys that can play one. That’s the level of those guys.”

In the past two years, the Wildcats have lost to Ohio State and Illinois in the semifinals of the Big Ten Tournament. But NU beat No. 17 Illinois for the first time since 1997 on March 12 and will get a crack at No. 3 Ohio State on April 22, lining up the 'Cats to potentially capture their first Big Ten title since 1990.

Zieba, Shropshire, Kirchheimer and all of Northwestern will be locked in as they look to achieve their original goal.

“Those guys aren’t just saying it, they believe it,” Swan said. “... When I started here we were building to this point. You can’t just say it and it happens, the conference is too good, you have to do it on a daily basis. So they’ve done that and built the program up. But we still have not done it, so we’ve got to keep pushing.”