Classism at Northwestern as illustrated through the popularity of Canada Goose memes
By Maya Mojica
9:02 p.m. Jan. 31 2019

Winter has arrived here at Northwestern. It’s time for a snowy Deering Meadow, an icy Sheridan Road and temperatures that drop below zero. But with winter also comes something arguably more chilling – the Canada Goose debate.

Costing almost $1,000, the expensive branded coats have become a source of great controversy on campus. On the Northwestern student Facebook meme page, “Northwestern Memes for Networking Teens,” members have increasingly used Canada Goose as the subject of their jokes, often provoking heated arguments in the comments section. In fact, Canada Goose has been used as a meme subject on the page over 20 times in the past week alone. 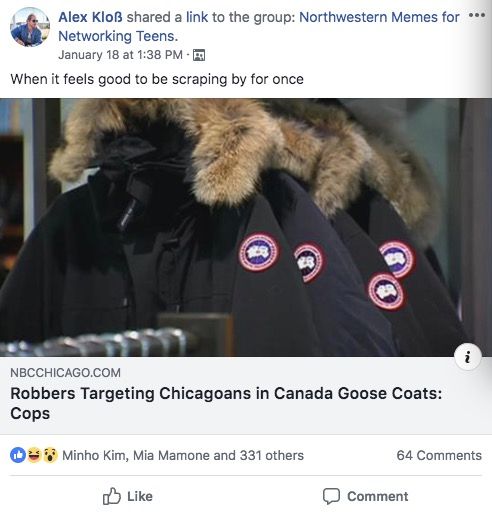 Screenshotted from the "Northwestern Memes for Networking Teens" Facebook page.

While the controversy has certainly picked up this quarter, Canada Goose found itself at the center of discussion in the fall when student Mari TG posted “Canada Goose is classist” flyers around campus, causing quite the uproar from students.

“It’s to make those who are in power uncomfortable,” TG said in a Facebook post about her Canada Goose flyers. “It’s to make us look at ourselves critically and spark a conversation about class and privilege.”

The debate over the Canada Goose coat, finding much of its voice through student-created memes, is centered around the idea of whether the coat represents classist beliefs or not. SESP senior Samantha Buresch, who has been involved in Social Justice Education at Northwestern, thinks the coats raise an important discussion about privilege at Northwestern despite not necessarily being classist.

“I think what perpetuates classism is when you have students with a lot of resources and wealth who don’t necessarily recognize it,” Buresch said.

Likewise, Medill freshman Lukas Kaplan says calling Canada Goose classist is a way of ignoring the larger issues surrounding economic inequality on campus. Kaplan is not a Canada Goose owner and believes his financial status to be low in comparison to most Northwestern students.

“It’s kind of ironic how these people are poking fun at some of these symbols, sort of blissfully aware of their own roles,” Kaplan said.

Other students, however, believe that the coats are just that – coats. McCormick sophomore Zachary Englhardt, who is an active participant on the meme page and does not own a Canada Goose coat, says he doesn’t understand how Northwestern students wearing Canada Goose coats are so different from students wearing any other high-end brand of clothing.

“Personally, I am someone who doesn’t have Canada Goose apparel and who couldn’t justify spending 1000 dollars on a jacket,” Englhardt said. “But if I walk into a room and I see a Canada Goose, it doesn’t freak me out.”

It is that same coat, however, that has been at the center of a considerable amount of conflict off campus.  NBC Chicago recently reported on a string of six armed robberies targeting those wearing the expensive coats.

Weinberg senior Alexander Kloss, an exchange student on financial aid, shared the NBC Chicago story on the student meme page because he believed it to be pertinent to Northwestern students, especially in the present moment. Kloss said that although he notices the divide and controversy surrounding Canada Goose, he doesn’t necessarily agree with it.

“It shouldn’t be something that divides people at the end of the day,” Kloss said. “It’s what people make of it.”

But Canada Goose coats have become so controversial that arguments in the comments section of the Northwestern meme page have gotten quite harsh. Weinberg freshman Sam King, for example, received what he describes as a particularly hateful reply to his own comment defending the idea that the coat is not classist.

“It was assumed that because I was defending Canada Goose that I had one, and therefore, I was rich,” King said. “That’s evidence, I think, of some kind of underlying hatred that I think is not okay.”

King, who is a low-income student and does not own a Canada Goose, also claims that all Northwestern students have at least some degree of privilege simply by being on Northwestern’s campus, and that ignoring that fact in the Canada Goose discussion isn’t exactly fair.

“I’ve met a lot of people who don’t have them who’ve claimed that they’re inherently awful because it reminds them of how capitalism exists,” King said. “But you’re going to come across stuff like that everyday. You’re on the campus of a private institution.”

While these memes appear to have been designed just for likes and laughs, many argue that they have implications beyond comic relief. Some students in the comments section have said that “Canada Goose is classist” memes are made as a way to cope with the fact that they cannot afford to own the coat themselves. To that end, several commenters on one meme that accused students of confusing “biting social commentary” with a “dusty meme about Canada Goose jackets” criticized the creator of the meme for being insensitive to students of a lower socioeconomic status.

But Buresch says the memes, while both comedic and a way to express ideas people might not want to say otherwise, have another purpose. They give students a way to connect with others who have experienced similar struggles on campus.

“It’s all about comedy,” Buresch said. “Comedy creates a community, and people want to bond with one another over something.”